Last evening, the human pet managed to throw a little shindig for Ares. We had a really great time watching Ares enjoy his dinner of Cesar's Filet Mignon and Frozen Paws peanut butter ice cream. He also got some new toys and of course, some more treats for his ravenous appetite.

Though we're still working on uploading all of our previous programming, we did manage to get one photo of Ares in his new duds on the human pet's cell phone. I feel bad for the poor boy. No one should be subjected to this kind of humiliation: 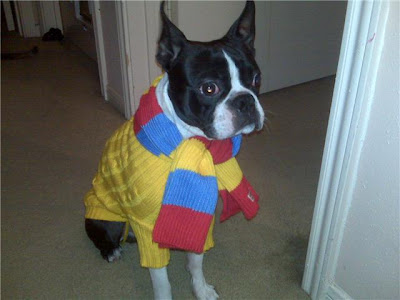 Wait a minute. Is it me, or is Ares trying to look smarter than me? Pfft. As if. 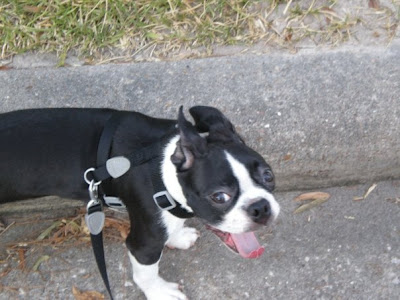 How horrible a brother am I that I did not even make it to the computer yesterday to tell the world that my baby brother, Ares, has turned ONE!

Happy Birthday Ares!
Even if you snort, sneeze, and fart, I still love you. You overwhelm me with your cuteness. 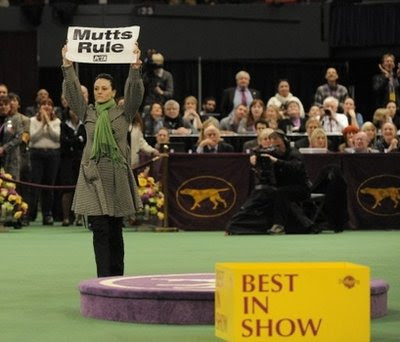 The human pet needs a new operating system on her computer, and without it, she can't do anything. Sure, the computer is up and running, but there's nothing connecting her to the great big world of the Internet. I'm having to compromise my morals and sneak into neighbors' homes to use their computers while they're at work.

Believe me, it's no fun.

Needless to say, I'll try to post when I can, but it seems like we might be reduced to crafting a PayPal button and seeking donations. I don't really want my pet to panhandle so we'll see what happens.
Posted by Zeus at 8:15 AM 13 comments

Behold! My entry for The Write-Away Contest held at Scribbit! It'll take your breath away...but you won't die. I promise.


I have set three goals for myself.

I hear you laughing and snickering, whispering under your breath, "You've got to be kidding me." Is it so hard to fathom that we cats also have things we would like to accomplish in this life?

I didn't laugh when I was informed of a human desiring to eat the most cockroaches in one sitting. I didn't raise an eyebrow when I discovered someone wanted to have the record for most modelling balloon sculptures in one hour. Hell, I didn't even so much as gag when I stumbled upon a woman who achieved the feat of being the most pierced person in the world.

So with all of the chicanery you humans claim as goals, I think you could suspend your disbelief for just one moment when it comes to my goal-setting.

Let's get right to the heart of the matter. I'm a cat. I was born with fur. I don't remember having committed the first sin in the Garden of Eden and thus realizing that I needed to be clothed due to my abrupt awakening of apple goodness. And even if I had, I'm betting that God, in His infinite wisdom, would have looked upon me and said, "Forget the not-so-inconspicuous leaf of private places. It doesn't suit you."

Don't throw your baggage on us, homo sapiens.

You did that one all on your own so carry that Samsonite sin suitcase with pride.

There's something wrong with this world when I can flip through the 900 channels on my television and come across such disturbing images as elephants getting it on rough and wild in the African savannah, dolphins chasing after one another to initiate foreplay, or even, watch my canine friends attempt to make a gazillion puppies. Is this really necessary? We of the animal kingdom should have known there was a problem when the infamous lyrics penned by The Bloodhound Gang stated "Let's do it like they do on The Discovery Channel."

Discovery Channel and all of your affiliates: I'm coming for you with my MA rating and parental warnings in tow.

Goal #3: Have legislation passed to prohibit the sale and distribution of catnip.

In April, 2006, I reported on the growing epidemic of catnip junkies among the feline race. In recent months, the problem has only gotten worse. Rather than "just saying no", kittens and young felines are harnessing this gateway drug at an alarming rate. Young kittens stand on the corner, turning tricks (Just look at the poor, addicted kitten on that dog!) for money, just so they can afford their nip habit. Others lie, cheat, and steal for a mere ounce of the green plant. How much more can our youth slide before we take to action?

As someone who has a family member who is hopelessly addicted, I know all too well the destructive powers this drug has on a feline. Even though A&E's Intervention refused my letters and calls for help, stating that "catnip is perfectly legal", this only serves as proof for how mainstream and commonplace this horrible substance is. It is time for our government to stand up and take notice of this problem and to be held accountable for legally supplying catnip in an effort to suppress our feline rights.

Yes, these are my three main goals.

Though they are lofty, they are not unattainable.

For where there is a will, there is a way, and though I am not named Will, a way I shall find.
Posted by Zeus at 6:00 AM 23 comments

The Brawl in the Fall

DISASSOCIATED PRESS: The air was thick with anticipation as the empty seats remained empty for the fight that was to go down in history as The Brawl in the Fall. Nonexistent fans arrived early to get prime seats, and once the human pet left the premises, Michael Buffer introduced these fierce competitors with his typical bravado.

The sound of the bell ricocheted off of the walls for the start of Round 1. The defending champion, Zeus, came out swinging early, proving he was not in the mood to "play games". The highlight of Round 1 came when Zeus connected with his patented roundhouse kick to the face coupled with a right jab to the jaw of the challenger, Cangura: 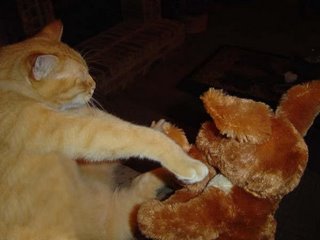 Cangura attempted to come back in Round 2, but Zeus would not have it. The defending champion unleashed a flurry of punches that left the Roo of Kung Fu backpeddling into her corner: 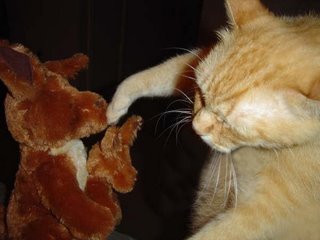 By Round 3, it was evident that Cangura would need to step up her game or be overcome by the Buddha Belly. Harnessing the power of his chi, Zeus performed his highly dangerous signature finishing move: Tailspike to the Eye. Cangura simply never recovered: 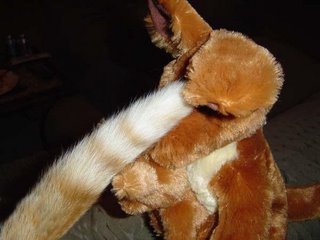 The referee indicated for the bell to be rung, and the match was ended with a win by way of knock-out being awarded to the defending champion. Zeus, however, shocked the audience when he placed his paw in front of the bewildered Cangura and had her kiss it: 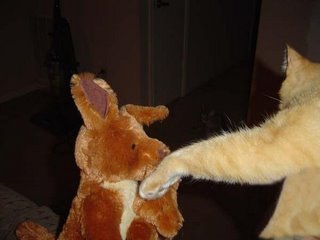 When asked later why he did this, Zeus responded: "I wanted to insure Cangura's allegiance so that this never happened again. I'm a lover, not a fighter, but when it to comes to The House, I will do everything in my power to protect the ones I love."

A brief comment was issued by Isis, the champion's sister, regarding the fight: "I don't really care if he can beat up a kangaroo. I can still kick his ass."

Perhaps we will see the two square off in the Grand Pubah Luxury Living Room soon. However, this remains uncertain at best.