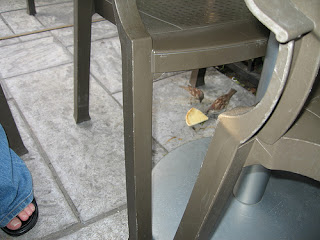 We spotted your human pet at a restaurant called Niko Niko's at around seven o'clock. She looked like she was having a good time with who we could only assume to be PMM. She had the gyro plate while PMM had a vegetable gyro. They shared some kalamari and sat back to discuss several topics...none of which included you.

Because of her ignorant behavior towards you, we attacked your human pet's pitas and made rude gestures at her feet. She got the message because the two ladies left shortly thereafter.

We hope this helps. 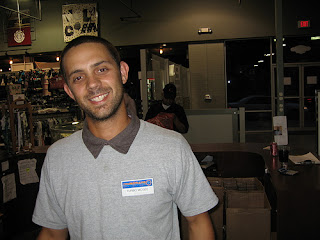 My name is Turbo McGee. I work at Soundwaves: a skate, surf, coffee, and music store. Yes, we're quite ecclectic! Anyhoo...your human pet stopped in to pick up a CD by Daft Punk and the other lady she was with bought a Bon Jovi CD. I hope this helps!

P.S. She told me I needed real sizes for the ladies' section that were for women over the age of 12. Please tell her I am working on that! Thanks! 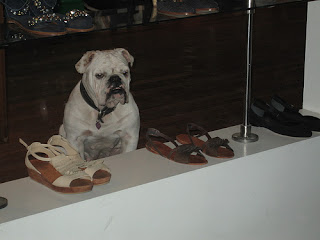 Your pet passed by my store at 10:30 on her way to a cafe called Brasil. She thought I was a fake dog until I barked at her. I let her know I was onto her and her evil ways. 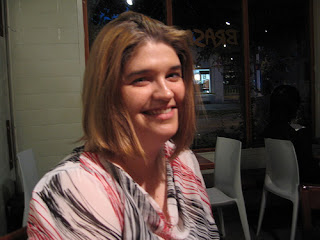 We spotted your lady at Brasil with her girlfriend. They looked like they were enjoying their desserts a bit too much if you know what we mean! Maybe it was the way your lady just smiled...you could tell she was loving that tiramisu. We hope we see them again because those two were a couple of hotties!

Granted, we're only eighteen, but could you please give us the hook-up?

I've been secretly listening to my human pet's phone conversations for the past few days, and I have deduced that she is heading out this evening to meet none other than...

I can't believe the sheer nerve of her! She's acting like she has a life...she has friends...she is her own person, free to do what she wants when she wants...there are other people in her existence besides me. What kind of pet thinks that?

The kind that rips your heart out of your chest with a spoon because it hurts more. That's what kind...

Feline and canine friends, I suspect that my pet is cheating on me. I am asking you for your help. If you are in the Houston area, and you spot them, would you please post here with clues about my pet's activities? We need to keep a close eye on her, and since my eyes and ears can't be everywhere like Visa, I know I can count on you to help.

Any and all information would be appreciated.
Posted by Zeus at 4:30 PM 5 comments

I know that it is hard for us to be together, my love, but do not fear: I will have you again. Yes, the human pet keeps you locked behind the pantry door at night, but your smell lingers through the kitchen, caressing me in its tender, chicken goodness. Oh, you delightful, wicked tease! Do you hear my tappings on the door? Do you see me rolling on my back for you, trying to but touch your blue bagginess of bliss? I'm practically a rabid animal over you!

There's never enough time in the day to tell you I love you.

If I were going to ask for one thing in life, it would be that you and I would never be apart.

I can't go on without you. I'm hopelessly and madly addicted to you.

If you were looking for a soulmate, I'm your soul today.

Don't ever be where I can't find you.

Have I said too much?

Have I not said enough?

I can't go on like this. I need you right now. Right. Now.

Surely, that means something.

Please is politeness with a P.

Every kiss beings with K.

Let me kiss you.

Bat you against the wall when I feel rambunctious.

Throw you up in the air for the sheer hell of it.

Toss you under the couch when I'm bored.

And cry when I can't find you.

For I love you, my feather-butt mouse. 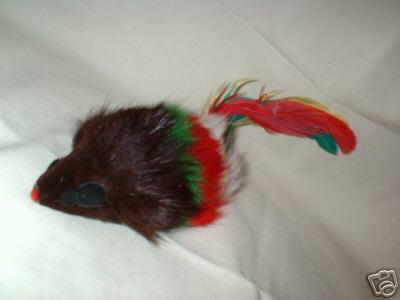 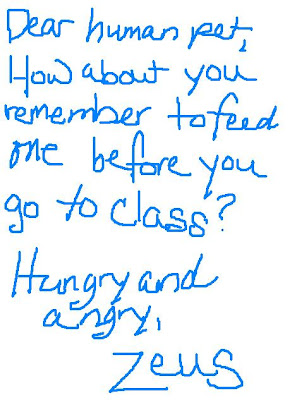 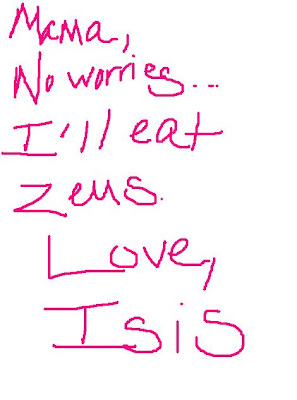 Going where you want to go 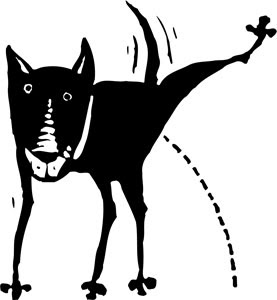 I've been put on a behavior intervention plan.

Apparently, the human pet considers peeing on her clothes to be a heinous and offensive act against not only her, but her fine selection of Italia jerseys and indigo boot-cut jeans. What she seems to be misunderstanding is that, every now and then, using different facilities to relieve one's self is a 'spice of life'. Variety, my friends, is essential to happiness.
I can't honestly be expected to enjoy continuously picking out bits and pieces of litter from in between my toes. Truthfully, I find it to be a nuisance. Imagine: Every time I use the litter box, I have to spend fifteen minutes afterwards licking and prodding my paws.
If you ever wondered why feline tongues were so sandpapery, now you know.
It's the effects of litter.
My human pet sat down and contemplated what the antecedent for my behavior was. She checked the litter box, made sure it had been clean, and then proceeded to analyze why I would do such a thing. If she had but asked me, I would have told her that she needed to wash her clothes, and I was but only giving her a gentle reminder to do so. She, however, came to the conclusion that I was bent on making her life hell.
Of course, my target behavior has been established: relieving myself in the box. The human pet even determined that she would positively reinforce my toiletry habits by giving me tuna treats. I suppose I could go in the litter box, but why? Am I not allowed a little reckless joyride every now and then?
There's so much risk involved in peeing on a human's clothes. There's always the chance you might get caught. You have to quickly run up, squat into position, shake a little bit to get those last few drops disposed, and then scamper off before anyone sees you. It's absolutely, positively thrilling!
It does, however, stink later, but that's a completely different issue.
Posted by Zeus at 10:37 PM 9 comments

Normally, I would dread the beginning of summer graduate work for the human pet as it would only mean that I would die of starvation, loneliness, and utter boredom, but this time, no...

I welcome it with open paws.

The human pet has been keeping late hours, working tirelessly on essays concerning learning disabilities, cognitive strategies, and IDEA, 2004. Overall, I think the work is improving her spirit. She seems to pulling out of the funk she has been in for the past few months.

Let's just hope that when her final comes on Tuesday, she passes it with flying colors.

(However, could someone explain to me how one flies said colors? Which colors and where do you fly them?)
Posted by Zeus at 8:46 AM 10 comments

Hello, how are you? Won't you tell me your name?

I wish I could say that something tremendously amazing has happened to keep me from all of my fabulous readers, but alas, I cannot. The truth of the matter is simply that I have fallen into something known as funkitis.

Or is it funkadelic?

Just as bears enter into the hibernating state during the winter, I too seem to have fallen into a slumber of my own. Only mine hits during the summer when it is nice and warm outside, with plenty of bugs to play with....oh wait. I can't go outside. Perhaps that is why it has struck.

Depression affects everyone.
Posted by Zeus at 9:43 PM 24 comments