There's no honey in honey-dos

[Looks at the Link List running along the right sidebar]

You're definitely on my "Needs To Be Fixed" List for the weekend.

Consider yourself warned.
Posted by Zeus at 4:03 PM 9 comments

I can't believe I've been backstabbed. Someone pull this knife out of my spine. Normally, I'd be crushed, but this time, I'm downright flabbergasted.

So while I may not let my human pet blog about her daily happenings, she's found a way to communicate to the masses behind my back. I highly suggest you ignore her. No good can come of this.

In order to know what you're ignoring, make sure not to click HERE.

We don't need her getting any ideas about stealing my thunder. It's tempting, I know, but really...show some self-restraint and walk away. We're about to have a good ol' fashioned throw-down here. Someone better give me fitty feet...

P.S. After thinking about it, this isn't too bad. Now, I'll know where she is and what she's doing whenever she updates. Oh, I never need to leave the house again. Wait a minute. I never leave anyhow. Regardless...I totally kick ass.
Posted by Zeus at 7:06 PM 11 comments

While sipping my morning brew, I looked through scores and scores of templates. Know that sick and disgusting feeling you get at the bottom of your stomach when you suspect you just got yourself into a big hole that you can't get yourself out of? I had that the whole time while I sifted thru those wretched thumbnails. 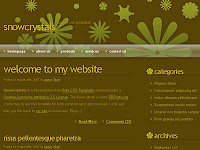 Or hey, what about this? 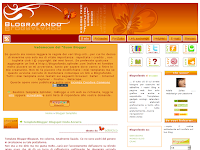 But I think the main emphasis needs to be on just one syllable here: Try.

Because in the end, when I manage to screw this blog's appearance worse than an afghan hound's fur caught in a windstorm, I'll be left with only one thing left to say...

I came back for this?

Could this comeback be any harder?

I'm blaming you, you three formerly subscribed, now unsubscribed readers. Didn't think a cat would notice the difference between 9 and 6? Yeah, I saw it. I may be a cat, but I'm not freakin' dyslexic. Were you only sticking around to read the archives? Were you too intimidated by my return to deal with new material? I hope you choke on my periods, quotations, and fabulously misdirected renderings done with Microsoft Paint.

Blogger tells you, "Excuse me, Zeus, but your template is so blaise. You need to upgrade! Click >>>HERE<<<"

Blogger tells you, "Oh, sorry to tell you, Zeus, but there goes your widget-thingie-majigs and your whatsits and your shenanigans. You can always find time to fix it though!"

Freakin' hell. Freakin' freakity freaked out to freakin' hell and back hell.

[A sound reminscient of hammering can be heard...] 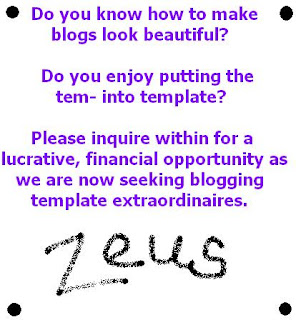 Applications now being accepted. And for the love of all that's holy: Do something about this hairball puke green background.
Posted by Zeus at 10:25 PM 21 comments

The Earlier Early Edition of the Thursday Thirteen

Thirteen Things That Happened To Us Since August 30, 2007

1. The human pet started working at Huntington Learning Center, increasing my time without her to a much more acceptable level.

2. The human pet began tutoring high school and college students with disabilities in her so-called "off-time", further increasing my time without her to an even more acceptable level.

3. She even took several trips: Las Vegas, Pittsburgh, the bathroom. All were fascinating.

4. Did I mention trips? Yes, she fell down the stairs as well. Not just once, but twice. In the same day, no. Total stairs traveled: Eighteen. (One set was fifteen while the other was three.) Was she drunk? We wish. It might have been more understandable. Instead, we're left to ponder the inevitable reality that our human pet is an uncoordinated slump of mass.

5. The human pet has finally reached the ending of her masters. She graduates in May. Hopefully, they don't have any stairs for her to descend in order to grab the sheepskin. However, we're now waiting on the University of Houston to see if the pet gets accepted into a doctorate program. We wonder if she's going to study Swan Diving. She'd be good at that.

6. We celebrated the human pet's thirtieth birthday on September 10th. We were actually going to blog about that but then realized we would have to come up with thirty things that were nice about her. That honestly didn't sit well with us since we're both not into lying.

7. Speaking of lying, Hurricane Ike was no lie. No joke either. No fun as well. We spent ten days without electricity. The human pet took the time to get to know the neighbors in drunken bliss, leaving us to our water and Purina One. She could have brought beer back, but did she? It's always all about her.

8. There's been lots of card games happening here. Texas Hold 'Em. Phase 10. Uno. It's much fun to watch other humans yell at the human pet when she doesn't shout "Uno". Behavioral theorists might have a hard time explaining why after the 1000th time of being yelled at for not shouting "Uno" the human pet still does not cry out.

9. The legend of Kit is no more. (For those who do not know who Kit is, he was the wonderfully faithful '98 Plymouth Neon that my human pet used to ride back and forth on.) The new guy, Rocky ('08 Chevy Aveo with the pimped out rims), is way more sexier. And yes, "more sexier" is appropriate since "sexier" just doesn't quite cut it.

10. The human pet's mama and papa came to visit, along with some younger sibling of the human pet's named Gino. They came down for July 4th weekend, and they actually weren't too bad. The mama-type slept on the couch, and it was great fun antagonizing the papa-type. Though he didn't say much, it was apparent how badly he wanted to bat us off him. That made tormenting him all the more fun.

11. Speaking of family, the human pet's cousin was diagnosed with cancer. Though he is doing much better now, we continue to pray for him. He's not out of the figurative woods yet. (You didn't expect all of this to be happy-go-lucky, did you?)

12. The human pet's sister became engaged not too long ago to some guy we know as the Joe. We've never met the Joe, but word on the street is that he is a good guy with a passion for playing something called the Wii. To the Joe, we salute you. It takes much courage to want to be a part of the human pet's family.

13. Finally, we came back to blogging on February 23, 2009. We think that's a pretty big achievement since we had ultimately said we would never pick up paw to keyboard again. You can all blame yourselves for leaving all of those comments and kudos. It apparently went to our heads. 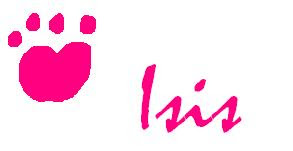