The human pet went to the post office today because she had figured out that Blackie was being held prisoner. The post office was holding him hostage and going to demand some serious cash for his release. They demanded ten squillion dollars, and the human pet didn't know how she would come up with so much cash so quickly...

Well, it didn't really happen like that, but I prefer that fantastical explanation since it seems more believable than what really happened. 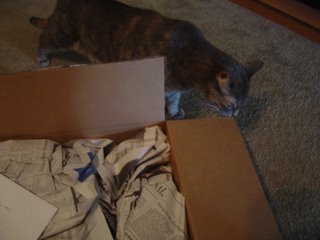 Isis checks out the box. "Umm, Zeus...I think we have company." 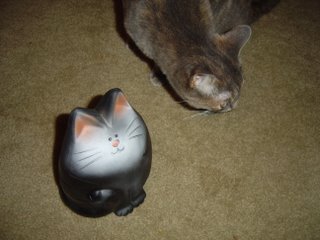 "Yep, I was right! Did you find out if he's got all of his shots? He can't be here otherwise!" 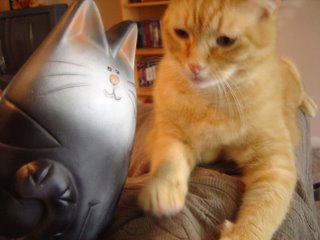 "Blackie, I hate to get personal so quickly, but you did get all of your shots, right? Give me something I can tell Isis so she shuts up." 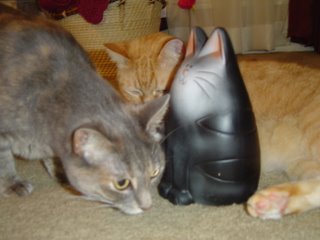 "Ceramic Tabby, eh? Natural immunity? I gotta sniff this to believe it." 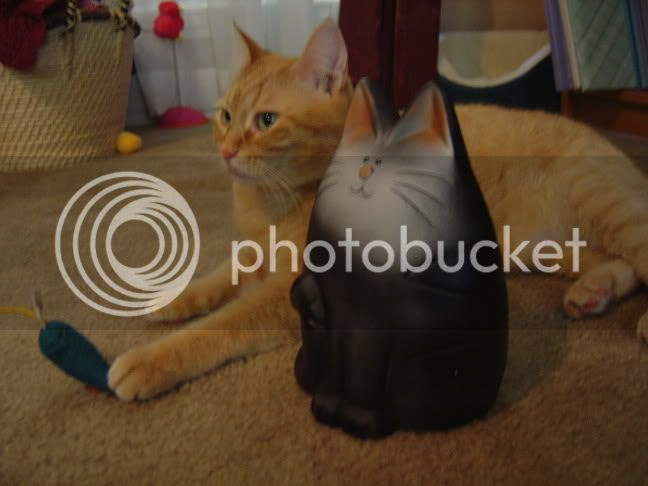 Blackie breathes a sigh of relief. "Thank goodness she believed it! I really want to stay here! I don't want to go back to the post office!"

"Bah! She doesn't have any power here anyhow. C'mon! Let's play some with the mousie! I've been waiting a long time to play with you."

A big special thanks to Derby for sending me my new friend! I will treasure him forever, and sooner or later, so will Isis!

Yay! Blackie made it! Mandarin and I were wondering if he was OK. Hope you and Isis have lots of fun with him.

Those blacky 'ramic kitties are springing up efurrywhere! He looks almos' bigger'n you.
We told Mommy it was ok to go adopt one but she can't find one. Daddy is going to haf to go look near his werk.

Hmmm. The Mom is now saying she wants one too. Like we need another Brat in the house. Bah.

Yay, Blackie finally found his way. Vir-ginger said he liked to wander off as a young one. So keep an eye on him.

We are all so happy that you didn't have to pay a ransom to get him from the post office.

And you are correct, these kitties have a wonderful immunity, so no shots and no vet visits.

It's an invasion!!! Mom saw some at the Wall Green place but they were all chipped or cracked so she didn't get one.

Looks to me like you are getting on famously!

I hope you can get Blackie to say something. Sunny and Cloudy haven't spoke since they got here, a month ago.

Very nice. Derby is sending happiness all over the planet!
:-)

Yeah! Anofur good home fur one of the Green Wall kitties! That must be why we don't see any more at our Green Wall store; they all found good homes.

Yeah Blackie is there! Do you think he will join you on your 'ventures?

Oh! Oh! Oh! I forgotted to tell everyone. Mommy said she had a surprise for us when she got home from va-ca-shun but we never told anyone what it was. We have 2 new 'ramic house mates too. I agree, they are very quiet and dont move around much. Pretty much mommy has to pick them up and move them. We havent named them yet cause we cant think of anything fabulous like Mango, Ashy, or Blacky. She will entertain some suggestions tho.

There sure are a lot of cats named Blackie out there. Congratulations on finally getting one of your own!

I am so relieved my brother made it safely! I forgot to tell my beans about the immunity. I'll have to remind them, so they don't put me in the evil cat carrier and take me to the vet. Toby talks about the vet a LOT and it doesn't sound good!
I'm glad we all found homes!
Inky

Victor: I had no idea it did that, and I didn't do it intentionally. Wow, how embarassing. Now we need to take a poll to see just how many computers are being blocked from the site.

Gosh! Another one of the litter of squillions has a forever home. We'll tell Midnight one of his brothers is now living in Houston. Best wishes to the new family member!

I much prefer your pretty fur over a ceramic Tabby anyday, Zeus!